Buckle Your Sheet Belts for a Terrifying Ghost Story 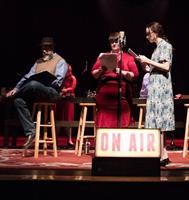 BANGOR, MAINE – October 29, 2019 – Husson University’s New England School of Communications (NESCom) is celebrating the tenth anniversary of its annual Halloween radio broadcast with a live performance of Edgar Alan Poe’s “MS Found in a Bottle” on Wednesday, October 30, 2019 at 7:30 PM at the Gracie Theatre.

The story is a terrifying tale of supernatural terror on the high seas and is suitable for both younger and older audiences who enjoy a good scare. The performance is free and open to the public. Members of the Gracie Theatre audience will have the opportunity to see everything that goes into the creation of a live radio drama – including the terrifying sound effects.

This WHSN-FM adaptation draws on the original Poe story to create a new set of chills. Billed as “Tales of Mystery and Imagination,” this award-winning broadcast features a cast of Husson University students and staff.

The live radio drama will harken back to the broadcasts of yesteryear when radio was the leading form of popular entertainment. At that time, popular programs like “The Shadow,” “Lights Out” and “Inner Sanctum Mysteries,” ruled the airwaves.

Looking forward in anticipation to the performance is Ken Stack, an instructor in the entertainment production program at the New England School of Communications at Husson University. He is the director of the radio play.

“The performance is a departure from NESCom’s usual emphasis on the use of cutting-edge technology,” said Stack. “Instead, the production style remains true to the radio plays of yesteryear. All of the sound effects and music are created in front of a live audience. Helping students better understand the roots and traditions of live radio dramas helps fit todays’ entertainment programming into a historical context.”

In past years, “Tales of Mystery and Imagination” has received awards from the Broadcast Education Association (BEA), Pinnacle Awards from the College Media Association, and the Maine Association of Broadcasters. Last year’s production won the BEA Festival of Media Arts, First Place Award for “Best Student Audio Comedy or Drama.”

In reflecting on the success of the live radio show, Husson University’s Dean of the New England School of Communications (NESCom) Marie Hansen, JD, PhD, remarked, “NESCom teaches creative and talented communication students in Northern New England. Many of them go on to become successful radio and audio professionals.”

“Year after year, ‘Tales of Mystery and Imagination’ wins awards. Those who attend the performance will enjoy a well-told ghost story that’s sure to capture their imagination. The quality of this live award-winning broadcast is outstanding.”

Since the radio drama is being simulcast on WHSN-FM, the show will start promptly at 7:30 p.m. Individuals interested in attending the live performance at the Gracie Theatre are requested to be in their seats no later than 7:25 p.m. Those unable to attend the live performance are also welcome to listen to the broadcast on 89.3 FM WHSN Radio.

Completed in October of 2009, The Gracie is Husson University's center for the fine and performing arts. In addition, The Gracie also serves as a learning platform for students from the New England School of Communications in digital audio, sound mixing, set design and construction, lighting, acting and electronics. For more information, visit GracieTheatre.com.

For more than 120 years, Husson University has prepared future leaders to handle the challenges of tomorrow through innovative undergraduate and graduate degrees. With a commitment to delivering affordable classroom, online and experiential learning opportunities, Husson University has come to represent superior value in higher education. Our Bangor campus and off-campus satellite education centers in Southern Maine, Wells, and Northern Maine, provide advanced knowledge in business; health and education; pharmacy studies; science and humanities; as well as communication. In addition, Husson University has a robust adult learning program. According to a recent analysis of tuition and fees by U.S. News & World Report, Husson University is the most affordable private college in New England. For more information about educational opportunities that can lead to personal and professional success, visit Husson.edu.